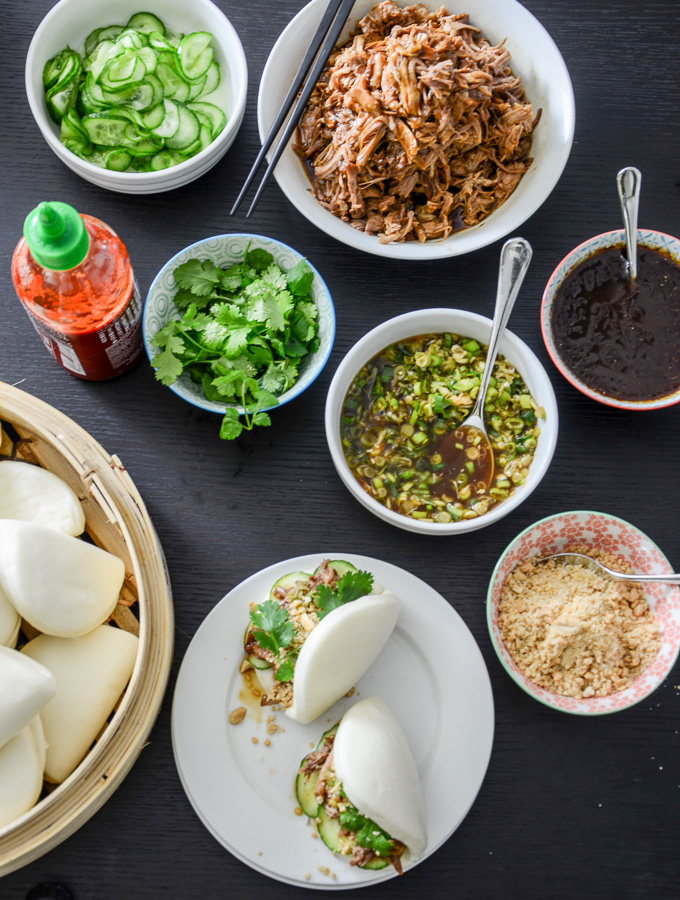 I first discovered gua bao not amongst the David Chang hype of the mid-2000s, but when I came home to find that my sister had brought me a care package from her Taiwanese friend’s home. One perfect fluffy steamed bun, still warm, stuffed with a slab of pork belly that had been simmered for hours in master stock, pickled mustard greens, crushed salty-sweet peanuts and a sprig of coriander. It was perfect. And there was only one. Perhaps there was more than one, but only one made it home to me.

I had to have more. I asked Tania to ask her friend to ask her mum for the recipe. Yes, I was desperate. I begged her to just happen to invite me over on the day that she was going to be cooking it again. But her mum went back to Taiwan and so I never quite managed to get the recipe off her but I’ve researched, tested, tweaked and re-tested this what seems like dozens of times now. And strangely enough, this is the first time that I’ve managed to photograph it – it’s the food blogger’s curse I tell you, cook something amazing and you’ll have to cook it at least two more times before you actually get around to photographing it and blogging about it. The first time is for taste testing, the second is because the first batch tasted so good and the third batch is just because.

It’s one of my favourite dinner party recipes because I love having guests assemble their own baos, talking about food and passing condiments  around the table.

There are so many gua bao recipes, David Chang’s being the most famous but Taiwanese mums have been making this gua bao long before David opened the first Momofuku. Momofuku’s pork buns use pork shoulder and is slow roasted for six whole hours. He serves it with quick pickled cucumbers, ginger scallion sauce, ssam sauce, white rice, lettuce, fresh oysters and kim chi. Traditional gua bao is made with pork belly, gently simmered in a master stock for two hours and served with crushed peanuts, pickled mustard greens and coriander.

How do you like your gua bao? It’s a matter of preference really, and you won’t hear any complaints from me about things being fatty but if I’m going to eat fat I’d rather it be delicious fat – crunchy pork crackling, gooey triple cream brie or deep fried something or other. Call me radical, but the texture of slow-braised, gelatinised pork belly fat isn’t really high on my list.

To me the perfect gua bao, non-traditional as it may be, has pulled pork cooked in master stock, David Chang’s quick pickled cucumbers and ginger scallion dressing, crushed peanuts, fresh coriander, extra sauce on the side and of course, Sriracha. This meal is as easy as buying your own baos – even David Chang concedes that he buys his in for the restaurant. They come frozen at Asian grocers and here in Canberra only one store sells them, trust me, I had to beg the (lovely) owner to order them in for me. So if you do decide to make these, go to SupaBuy on Wooley St in Dickson and make sure you tell them how much you appreciate them stocking gua baos.

If you can buy them – seriously, just buy the baos already – it will halve your cooking time. If you can’t get them where you are, I’ve included a recipe to make your own bao below. There are so many different recipes for those too and after testing a few, I’ve decided simple is best. There’s a lot on the internet about low gluten flour and high gluten flour. You can just use plain flour, but I like to use a low-gluten flour as it’s lower in protein and yields extra fluffy dough – look on the nutritional label, you’re looking for about 8g of protein per 100g of flour.  High gluten flour, by contrast is more for baking breads that require more elasticity, a high rise and chewy texture. There are too many recipes that require you to mix low and high gluten flours – I’m not even sure what that would add and why you wouldn’t just use a regular flour if you were going to mix two flours with different gluten and protein contents. Bleached flour gives you those perfect white steamed buns and unbleached can make them look a tad yellow, but they taste just as good.