With a couple of kitchen shortcuts, I’ve managed to pin one of my favourite Malaysian street eats down to a 30 minute weeknight dinner. Even if you’ve never tried Chilli Pan Mee before, there’s something very comforting about a bowl of noodles and soy-based minced pork, all tied together with the richness of a perfectly poached egg.

I’ve always loved chilli pan mee. Made famous by Restaurant Kin Kin in KL, this noodle dish is a variation of the traditional pan mee soup. In Canberra, XO’s famous udon bolognese, is a bit of a riff on this dish – though it may not have intended to be.

Going to Kin Kin itself is not for the uninitiated. It’s situated in a particularly dodgy part of central KL – even as an adult, Mum would never let me go eat there by myself.

The restaurant is run down and basic and has many rules. Do not ask for more chilli, one proclaims. Kin Kin do not sell chilli, says another, referring to the famous dried chilli topping that sits atop the noodles. It’s watched over by an older Chinese uncle who keeps a watchful eye over things from the kitchen.

A few years ago, I was obsessed with recreating this dish. It couldn’t be that hard, I figured, there are essentially only a few simple elements – noodles, pork, chilli, egg and token greens.

After completing part one of Mission Recreate Chilli Pan Mee (aka eat at as many different pan mee vendors in a one week stretch as possible), I’ve been able to make a pretty good guess at duplicating this at home.

I’ve taken a few shortcuts that make this dish a quick weeknight meal, which I’ll break down into the elements below.

Noodles: After much trial and error with making pan mee noodles from scratch, I’ve conceded that they don’t add anything extra to the dish, other than authentic food vendor vibes. I’ve conceded that store-bought fresh wheat noodles are as good, if not better. The thick udon-style ones are chewy and add lots of texture. Of course, there’s a place for making your own noodles from scratch, but after trying multiple times, I’m not convinced that it’s worth the effort.

Pork: This is probably the simplest element – bit of onion and garlic, minced pork, soy sauce and cooking caramel. I’ve made it without cooking caramel before, and it’s fine, but it lacks that rich, depth that pairs so well with the melted egg yolk.

Chilli: Ahh, the magic ingredient. You can make it yourself by cooking up a mixture of dried chilli flakes and fresh red chillies. It’s not a difficult process, but had one major issue the few times I tried it – the heat of the chillies/chilli flakes varied so much that sometimes it would be mouth-numbingly spicy with no chilli flavour and sometimes it would be the opposite. Tean’s Gourmet Prawn Chilli is an excellent substitute – and saves a ton of time.

Ikan bilis: Even if you don’t like fish, it’s worth trying to source these. They aren’t overly fishy and add a salty, crunchy element – much like crispy, fried bacon. I suppose you could substitute crispy fried bacon if you wanted! Use the best quality ikan bilis you can find – they can be tricky to source in Australia. The good quality ones are lighter in colour, thinner, have been cleaned (you won’t see black poo shoots in them). Anchovies in a jar are not a substitute for dried ikan bilis – though of course, you’re welcome to give it a try if you’re game.

Egg: Nothing fancy here, a poached egg. Fresh eggs are easier to poach.

Greens: Sweet potato leaves are traditional, though I’ve had very limited luck getting them, so I’ve used blanched baby spinach which works fine. 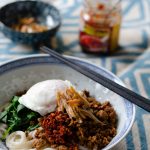 With a couple of kitchen shortcuts, I’ve managed to pin one of my favourite Malaysian street eats down to a 30-min weeknight dinner. Even if you haven’t tried it before, there’s something very comforting about a bowl of noodles and soy-based minced pork, all tied together with the richness of a perfectly poached egg.
Prep Time5 mins
Cook Time30 mins
Course: Main Course
Cuisine: Chinese|Malaysian
Serves: 4

for the mince pork

for the minced pork

Previous Post: « Fennel agnolotti with oxtail ragu – and supporting local
Next Post: How to cook dahl: a step-by-step guide »