If you haven’t heard of Mamasita’s grilled corn, their famous Elotes Callajeros, you’re about *counts on fingers* eight years behind the times but rest assured that you’ll be all caught up in about five minutes. Plus as long as it takes you to get to a supermarket and get corn, butter and chipotle. And just about time too, because corn is just coming into season and it is delicious, as well as very useful measure of love.

Grilled corn is delicious, but Mamasita’s is just next-level good. It’s charred and smoky, sweet and creamy with bits of satisfyingly salty Parmesan that pulls it all together, and a wedge of lime for optional added zing.

Yeah, that’s rubbish – there are lots of way to skin a cat, or in this case, cook an ear of corn. There seem to be about a hundred tips out there all promising the secrets to cooking the best corn, but let’s be honest – even simply boiled and slathered with butter, it tastes pretty damn good. Let’s not over complicate things.

How to choose corn

Ah, it seems so simple, but I found out the hard way – not all corn is made for grilling as I discovered when I tried cooking it in Colombo. Turns out that what I was getting was field or dent corn which looks almost exactly like a regular ear of sweetcorn but tasted hard and dry. Field corn is used primarily as livestock feed and is sometimes used as an ingredient in processed food products.

Here in Australia, it’s safe to assume that what you’re buying is sweetcorn – they’re technically a supersweet variety.

Nearly all corn grown for fresh market are supersweet types. These types differ from the traditional normal type for they have a shrunken gene which produces twice the level of sugar as in normal varieties and also reduces further the rate of sugar conversion to starch. The result is a very sweet cob and supersweets are now the major type of sweet corn sold on the fresh market. Supersweets are also available in bi-colour forms which have white kernels dotted amongst the yellow kernels which give them a more distinctive appearance from the traditional normal types.

I prefer to buy corn still in their husks as I find that they keep longer. Look for fresh green husks that are wrapped tight, check the cleanliness of the hair or silks at the top (technically they’re called tassels) and look for cobs that feel heavy. You can also try to feel the kernels through the husk to gauge how plump they are. I often peel back a teensy bit of the husk to check the insides – the kernels should be fully grown (sometimes the kernels at the top of the cob are under-developed) and look full and fresh.

With pre-cut, avoid ones where the colour has started to turn. Where it has been trimmed, the kermels will start to go a light orange or look almost mouldy – a sure sign that it isn’t fresh.

How to cook corn

There’s absolutely no need to worry about undercooking because sweetcorn can be eaten raw – and it is surprisingly delicious when fresh – try it! It’s not for everyone, but raw corn is great in salads. It’s healthy and a great ingredient to have up your sleeve if you need food in a hurry.

Corn can be boiled, steamed, grilled, baked; either with the husk on or off. There’s really very few ways you can go wrong if you’ve got a good-quality fresh product to start with.

Arguably the best way is to boil corn, husk-on but silk/tassels removed – then remove the husks and grill it. Keeping the husk on preserves more of the moisture and flavour, but it’s a more involved process as you need to peel back the husk, remove the silk/hair, replace the husk and then boil.

The grill only option is great too, but corn can take a long time to cook on the barbecue and the long slow cook has the potential to dry out the kernels. The recommended time to book on a barbie is 25-40 minutes – a steak can cook through in under 15 so it’s a bit more of a timing exercise going this option.

I opt for the much less fiddly and foolproof option of fully peeling the corn, boiling for 10 minutes and then grillling until charred. This way it can go from stove to barbecue with as little fuss as possible – I don’t have to stop and peel each cob after boiling – it’s quite a messy process and the silks/hairs go everywhere. And it cooks much faster on the barbecue if it’s been par-boiled first.

How to make Mexican-style street corn

I can’t remember exactly how long ago, but I’ve been holding on to this official Mamasita recipe card for years, expecting to get around to it sometime soon. The restaurant’s recipe, which has been widely shared and documented on the web requires you to make a spice mix and chipotle mayonnaise. A few years ago, chipotle had to be ordered from specialty suppliers to make this mayo; today Chipotle mayonnaise is readily available at supermarkets – so you don’t even have to make your own. Over the years, I’ve simplified this recipe many times over because I rarely ever used the whole 250mls of Chipotle mayonnaise, and I lived in fear of giving my friends salmonella from unpasteurised eggs.

I have finally settled on a mixture of melted butter and store bought Chipotle Tabasco – a fuss-free version to get that same smoky and creamy flavour, with a lot less work. Plus

I’ve attached the original recipe card here for those who want to go the whole hog. If I had to guess, I would say that my shortcut tastes about 90% like the original but takes only a quarter of the time. 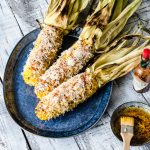 Previous Post: « Step by Step: The Short Version of How to Start a Food Blog
Next Post: How to Season a New Wok »